The famous World Championship Derby Track in Eagle River, Wisconsin, has a new owner – and an aggressive new plan going forward – as a group of longtime snowmobile industry insiders and passionate fans of the event purchased the track from now-former owner Chuck Decker.

The trio is promising exciting, year-round events at the facility – now deemed the World Championship Derby Complex under the new ownership – as well as a razor sharp focus on bringing the World Championship Snowmobile Derby back to its glory days when it returns to the banked oval in January for its 56th running.

“This place used to be a diamond, and it’s gotten a little rough,” Marchbank said when he, Davis and Anderson participated in an exclusive interview with Snow Goer. “I hope to see it a diamond again, for the Wisconsin Northwoods and for all of racing.”

As a part of the transaction, the purchasing group acquired 30 acres of land and a handful of buildings that combine to make it one of the largest indoor/outdoor event centers in all of the Northwoods. But they also acquired the trademarks, records and other artifacts that will keep the history of the famed World Championship race alive, and keep it in Eagle River.

Anderson will serve as the CEO of the new Complex, while Davis is the president and general manager, and Marchbank serves as the vice president of operations. Those three are the primary investors and the people who will be directing the day-to-day operations, but they are backed by four other passionate snowmobilers as investors, each with their own deep tie to snowmobile racing: Brian Schiele, owner of the Elmhurst Auto Group in Elmhurt, Illinois; Gary David, former owner of David Building Supply in Marshfield, Wisconsin; master engine builder Russ Lemke of RLE Enterprises in Mosinee, Wisconsin (who is also in the International Snowmobile Hall of Fame); and Tom Anderson’s son, Scott Anderson of Leisure Features/Snowmobile USA in Eagle River.

The World Championship race has been held on this site every year since 1966, after moving from Dollar Lake near the Chanticleer Inn east of town, where the first two World Champions were held. The Decker family had owned and operated the track since it purchased it from the Eagle River Lions in 1985.

The purchase price has not been disclosed.

While in a “transition mode” for now, the Complex will be open for business soon with a new website, ne

“There are tremendous possibilities for this site – not just for the snowmobile races during the winter but for a year-round venue, promoting the Northwoods and promoting the area,” Anderson said. “It’s got the largest show hall in the area, it’s got 30 acres to work with – indoor and outdoor display – it’s got a race track that can be used year-around for various events. It’s just got tremendous possibilities. All three of us have looked at that in the past and just drooled over it – now we have it.”

Specific to the World Championship Snowmobile Derby, the trio plans an all-out effort to win back fans, racers and other Derby followers for this winter’s January 18-20, 2019, event  through a number of means – from advanced online discount tickets to free wifi and creating a more entertaining and less costly program for everybody involved. Asked for examples, Davis clicked off a list including shorter breaks in the action during track grooming sessions, more variety in the types of racing in front of fans (including bringing vintage and youth racing back out on the famed oval), more pageantry over the course of the weekend, better food service to the VIP and so-called “Hot Seats,” the planned return of a huge infield Jumbotron screen and more.

“A new experience, that’s what we’re really working toward,” Davis said. “A new image, a new experience in racing – you’ll see on our website that our hashtag is #racingforward.”

Expect to see more entertainment on the track, with more kids racing, vintage racing and fewer long breaks in the action.
Within snowmobiling, the group is planning two additional new events – a second vintage event to go along with the Vintage World Championship, and a second U.S.S.A. oval event featuring the current sleds, dubbed the return of the World Series of Ice Ovals, in March.

Outside of snowmobiling, Davis pledged the group would have at least one major event at the track eac

h month going forward. They will include localized events like flea markets and weddings; other powersports events, like the return of the trademarked World Championship UTV/ATV Derby and a big truck and tractor pull in the summer; a huge pond hockey tournament in February and other events for which the group has verbal commitments, Davis said.

There’s a lot of infrastructure in place, including six multiple multi-story buildings circling the track, the large Expo Hall and multiple other outbuildings, plus the high-banked oval track that’s the center of the action every winter.

However, the derby grounds has fallen into a certain state of disrepair in recent years. The work to renew the Derby Complex grounds will begin in earnest very soon, the trio said.

A Business, And A Passion

Asked about their histories with the event, Anderson spoke of seeing Bob Eastman win at the first Derby that he attended, Marchbank recalled going to the Derby at age 13 and Davis noted that he’s attended 52 of the 55 World Championship events.

Anderson and Davis have both been sponsors, volunteers and very vocal advocates of the Derby. In fact, they had been trying to help the Decker family find a potential suitor for the track when owner Chuck Decker made it known that he wanted out.

“Russ and I tried to help get it sold for several years and it never happened,” Anderson said. “Then we kind of looked at each other and said, ‘Maybe we should look at it ourselves.’ That probably started in about March. We approached the owner at that time, Chuck Decker, we worked it on-again, off-again, on-again, off-again, different ways we could do it. It was contentious at times, but we finally got it done.”

Davis, Anderson and Marchbank have each been quite successful in business and they aren’t taking this step to lose money, they said, but then admitted that emotion and dedication to snowmobiling played a part in their purchase. And they made sure the Derby stayed alive — and stayed in Eagle River.

“That’s a big part of what we purchased,” Davis said. “By us buying the whole package, that trademarks stays in tact here at the World Championship track. That was a huge, huge item for us. It doesn’t belong anywhere else.”

Want to join the discussion?
Feel free to contribute! 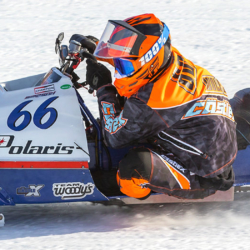